He chose the scruffy one, the smallest paws

She sat upon his shoulder, dug her claws

into his years of boredom, mess and joys

Only at his feet she’d lay her birds

Despatched all girlfriends (except me) with piss

and hairballs scrivened meaningful as words

She was his girl: the point was hard to miss

She edited our evenings with her tail

Restructured days as if she knew the tao

But gradually set down her pen, grew frail

When love has followed life it makes us taller

All deaths are equal size, not one is smaller 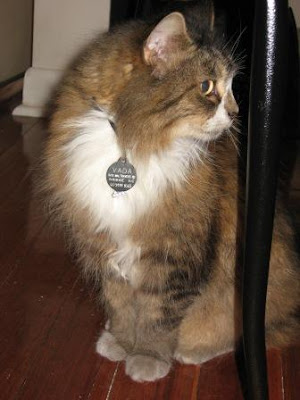 Today’s poem is a sonnet for our cat Vada, who died yesterday at the ripe old age of 16. She was always Paul’s best girl, I was tolerated as the mistress. Other girlfriends were not so lucky and got their bags pissed or vomited on. So I count myself lucky to have been spared the hairball of disapproval.

It’s also based on three cat-related suggestions from peeps:

And before you ask – remember the character Vada in the nineties film My Girl with Anna Chlumsky and Macaulay Culkin? That’s who she’s named after, not Darth Vader. This has required a LOT OF EXPLAINING over the years, and is why I get final say on the names of our children. But we always just called her Vades.

Picayune is a lovely word, it means “small and of little importance”. The death of a friend is never picayune, even if that friend was a cat.

She leaves a nice space.

Terry Pratchett said there were no black cats, only black, cat-shaped holes in the universe.

Vades must be a camouflage-shaped hole in the universe, I think.

I remember you telling me about her when you and Paul first started dating. And I remember you explaining her name to me also - I happen to quite like that movie too =)

beautiful poem for a beautiful fur person.
my condolences for your family's loss.

· Species of Spaces and Other Pieces - Georges Perec

· Mrs. Frisby and the Rats of NIMH - Robert C. O'Brien

· Where is Maisy's Panda? - Lucy Cousins

· The Double Life of Veronique

· The Sound of Music

· The Life of Brian

· Singing in the Rain

Find me on Goodreads